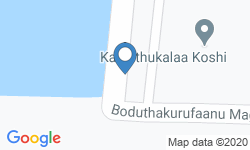 Located in Malé City, Makaira Luxury Charters had its official launch during the Maldives Game Fishing Challenge in November of 2012. Although its first fishing trip coincided with the MGFC’s kick-off, the boat managed to claim several awards during the tournament, including Champion Angler, Champion Team, and Champion Boat. Since then, things have only got better.

The “Makaira” is a 38’ Gulf Craft boat powered by twin Yamaha F250 engines. The vessel features a comfortable seating area, cabin, and bathroom with shower. Other amenities onboard include a range of marine and fishing electronics, GoPro cameras to record your catches, and even Wi-Fi.

As far as its fishing equipment goes, the Makaira is rigged with Shimano and Penn International rods and reels, complete with lures, poppers, and teasers. It is decked with outriggers and centerriggers, as well as a single fighting chair for handling larger fish.

The Makaira team specializes in a variety of fishing techniques, offering trolling, popping, jigging, casting, and more. All fishing gear, lures, and fishing licenses will be provided by the Makaira crew, with the equipment for fly fishing also made available upon request.

As long as the regulations will allow, the guests are free to keep the fish they catch, with a complimentary cleaning of the catch by the team.

Hussein Makaira
pequeño, Maldivas
Captain Hussein Makaira has been working on the water for 18 years and has built a reputation as one of the Maldives' top charter captains. Capt. Hussein is a sport fisherman through and through – fishing is his passion and he always encourages the safe release of fish after the battle is over. Capt. Hussein is a member of the Fishing Association of Maldives and his whole crew are pro divers. You're in safe hands aboard Makaira Luxury Charters.