Want to experience the adrenaline rush of reeling in some seriously big fish in the Bluefin Tuna capital of the world? Come aboard Wild Tuna Charters, located on the beautiful north-eastern shore of Prince Edward Island. Captain Scott Lewis can’t wait to take you on the angling adventure of a lifetime!

Wild Tuna Charters is a true family business. Capt. Scott runs his charter with his wife Sara, and they both have saltwater running through their veins. Capt. Scott is a third-generation fisherman, hooked on angling since the age of 9. Sara’s fishing roots go back even further – try 16 generations! Who could be better equipped to introduce you to this fantastic fishery?

You’ll set out on your adventure in a 45’ Four Ports Marine commercial vessel. She can comfortably accommodate up to 6 anglers, giving you plenty of room to reel in a monster catch. She’s equipped with top-quality navigational and safety equipment—combined with your captain’s expert knowledge you’ll be on the hottest fishing spots in no time.

As for the species you’ll be targeting? Bluefin, Bluefin, and more Bluefin! There’s a reason why so many anglers head to PEI to reel in this much sought-after species. You can expect to be reeling in some impressively-sized beasts, from a whopping 700 lb upwards. Even better, you’ll have the chance to battle these hard-fighters a mere 2 to 5 miles from shore.

Whether you’re a hardcore angler who wants the bragging rights that come with landing a monster-sized Bluefin, or can’t wait to take the kids on an awesome adventure they won’t forget, Capt. Scott has you covered. He’ll provide life vests for your little ones, as well as top-notch Penn and Shimano equipment. In fact, Sara’s father custom-made these rods specifically for fighting gigantic Tuna.

Scott Lewis
St. Peters Bay, Isla del Príncipe Eduardo, Canadá
Growing up in a fishing family, Captain Scott Lewis has been fishing since he was 9 years old. In the late 1970s and early 1980’s, Scott fished tuna with his father as a young boy. He saw the fishing methods evolve since then and knows all the tricks of the trade. Since the mid-1990s, Scott has caught hundreds of tuna both in the commercial and charter fishery. A licensed captain, Scott started tuna chartering in 2012 and loves sharing his passion for the giant Bluefin tuna, our natural surroundings and the thrill of the catch with folks from across North America, Europe and as far away as South Africa. The thrill of catching tuna never gets old for Scott and his enthusiasm is infectious. If you want to hear a really great story, ask Scott about the biggest fish ever caught [spoiler: it was almost 1200 pounds!] In addition to tuna chartering, Scott makes his living fishing lobster, mackerel, halibut, herring and shark. 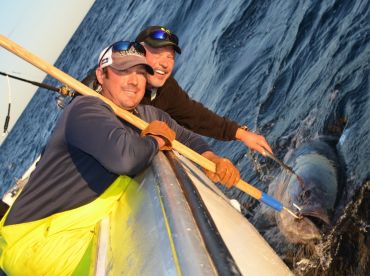 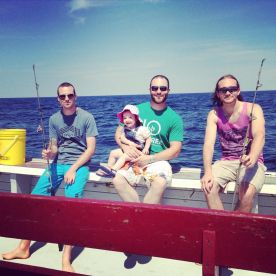 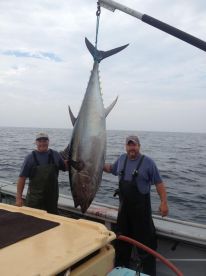 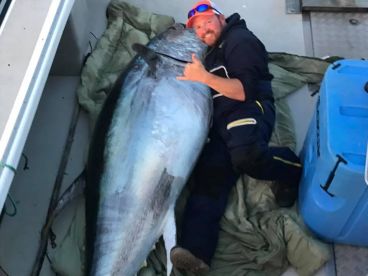